If the body faces a condition of a lack of energy it will adapt to it by a mobilisation of his lipid reserves as a normal adaptive response. Free fatty acids are used to generate energy. During this process ketone bodies are formed which accumulate in the body and their concentration can be measured in blood.

The energy demand of high performance dairy cows increases rapidly after calving at the onset of lactation and cannot be met by food intake. 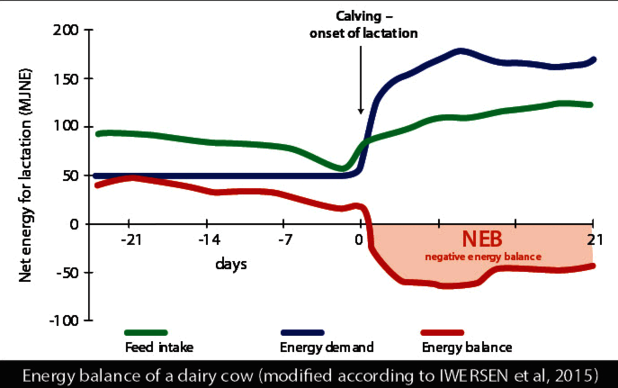 High performance dairy cows run through a period of negative energy balance during early lactation which leads to an impairment of the immune system.

The transition period – a time of extraordinary importance for the management of dairy cows!
The last 3 weeks before calving until 3 weeks after calving is a critical period of time for the health, production and profitability of dairy cows.

Approximately 75% of diseases in dairy cows occur within the first month after calving!1

30-50% of dairy cows come down with a metabolic or infectious disease during the transition period.2

This website contains information on products which is targeted to a wide range of audiences and could contain product details or information otherwise not accessible or valid in your country. Please be aware that we do not take any responsibility for accessing such information which may not comply with any legal process, regulation, registration or usage in the country of your origin.